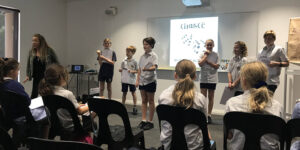 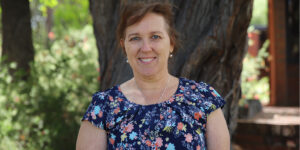 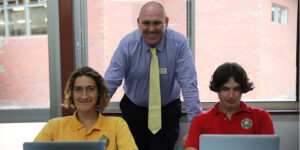 Former student, Nic Bowen (99) was the first student from Bunbury Cathedral Grammar School to attempt the solo swim to Rottnest as part of the 1999 Rottnest Channel Swim.

He recently met with this year’s solo swimmer, Owen Cattaway, a Year 12 student at Bunbury Grammar, to share his experiences and impart his knowledge from his two consecutive swims.

In 1999 and 2000, Nic braved the cold conditions to swim the 19.7km distance to Rottnest and on both times, suffered from hypothermia and was withdrawn from the race for his safety.

Despite never making it to Rottnest, Nic is philosophical about his accomplishment and grateful for the life-long skills he gained.

“I learnt some hard lessons along the way from things that did not go exactly according to plan, and they are great life lessons,” Nic reflected.

“Although it would have been great to run my fingers through Rotto sand, I have achieved some truly fantastic things since not getting to Rottnest!”

“The Rottnest Swim really does give you the mental fortitude and obviously the physical fortitude but, most importantly, it creates a benchmark to know that you can achieve great things with preparation and perseverance,” he explained.

For Owen and future swimmers attempting the Rottnest Channel Swim, Nic’s simple advice was to have a go.

Nic also advised swimmers to be physically and mentally prepared and to only focus on the aspects which are controllable.

As the third swimmer from Bunbury Grammar to attempt the solo swim, Owen has mixed emotions of excitement, apprehension and privilege.

“It’s very daunting as it’s a long swim. The highest amount that you do at any other open water swim event is 10km, so swimming almost 20km is a big step up and even though it doesn’t sound like much, it’s a long way – two marathons in a row,” Owen said.

“It is an honour to do it with the School because I know others who would love to do it but do not have the opportunity. It is crazy to think that three people at this School have attempted it, including myself,” he added.

With only a few days left until the event, Owen is in the last leg of preparation.

“In the build-up to the swim, we have gone to the nutritionist and the physio, to tick every box there is. I have trained every day, sometimes even twice a day and swum in the ocean to get used to the cold and I eat a lot to get the nutrition right,” he explained.

When Owen hits the water this Saturday for race day, he will be in the thick of the action, which is one of the reasons he loves open water swimming.

While Nic and Owen have different experiences, set apart by 20 years in their solo attempts, they both have been trained by experienced swimming coach, Bob Marshall.

“Bob was very kind and encouraging and he certainly sparked an interest in me,” Nic said,

The tradition of the Rottnest Channel Swim started with Nic and Bob 25 years ago when Nic was swimming in shorter open water events for the School.

“Bob planted a seed in me, and we worked together with that and from there he has built this program that allows and encourages kids to continue to step outside of their comfort zone a bit more and challenge themselves,” Nic said.

“He is definitely a grower of people, to push people outside of their comfort zones to do things. That is a wonderful thing,” he said.

Owen is also appreciative of Bob’s commitment to the swim club at Bunbury Grammar and said, “I love swimming with Bob and he has been amazing.”

“When I first started swimming, I went to Gold Coast with him for a swimming camp, and that really set me off for competitive swimming. It has been amazing. He has helped me a lot, like when I first decided to do a team, he was very helpful with that,” Owen said.

This year, 12 students from Bunbury Cathedral Grammar School are participating in the South 32 Rottnest Channel Swim as a team and Owen is swimming in the solo event. To read more about the students participating see this news story.