Home  >  News  >  Culture intertwined with a bit of fun 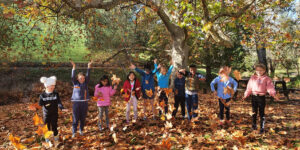 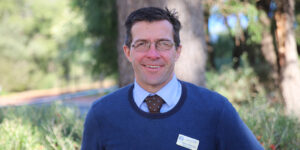 As part of their Humanities and Social Sciences curriculum about First Peoples, Year 4 students had the opportunity to experience a Cultural Session with Mr Josh Whiteland of Koomal Dreaming. The session began with students assembling at the fire ring in the bush at the back of Palmer Oval.

Mr Whiteland first gave the students a brief overview of the local area and the traditional lifestyles of the Wadandi people. Students also learnt about the six Aboriginal seasons and how they influence what people foraged and hunted.

The students were intrigued by the many traditional artefacts and tools which Mr Whiteland had brought along with him. From boomerangs and cutting tools which are hundreds of years old to kangaroo skins and didgeridoos, they were almost in disbelief that such tools were handmade so many years ago.

What fascinated the students most was the traditional fire lighting demonstration where Mr Whiteland had use a hand drill to create an ember. Students first tried their hands at it, but the winter weather proved too wet, and Mr Whiteland had to start again covering the wet mulch on the ground with sand. Students cheered with excitement as smoke appeared from his hand drill, and a fire was successfully started.

The session ended with a didgeridoo song while the girls danced an emu dance, and the boys danced a kangaroo dance. Everyone enjoyed the experience and the opportunity to learn many new things about Aboriginal culture.